Coco 3yr, Buttercup 12yr and Prince 9 months.  All three rescue.  They sleep together all the time but when it come to sharing Buttercup is the boss. 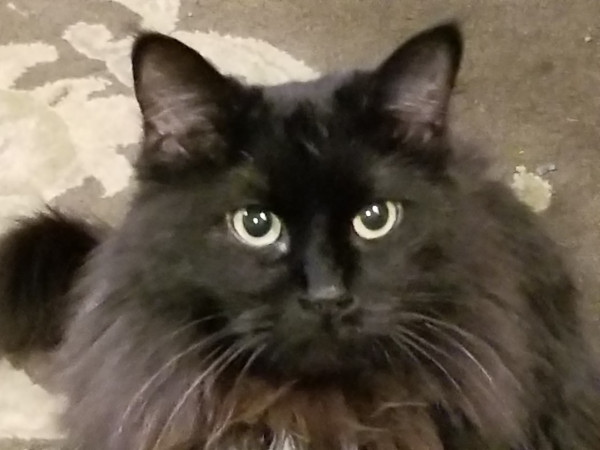 Rosie, 3 yrs old Another Rescue.  She is the boss of the everyone, including the dogs

Easter
She requested,  "I'd like a story around a chocolate factory. Any genre, TV, or movie."   Hopefully you'll enjoyed this messy treat.

Having an afternoon off, Napoleon watched Illya examine the chocolate displays in the Main street stores of the windows.
“Illya, what’s your appeal with chocolate?” he asked.

“I do not know what you are talking about,” the Russian replied, sneaking a glance at the Chocolate factory’s windows.

“It’s not necessary,” but the look in Illya’s eyes said yes.

Knowing it was something he would enjoy, “Well, partner, I want to go.”  Napoleon said, entering. Smiling at the clerk, he asked,

“When’s the next tour, my friend and I’d like to take it.”

The girl recognized Solo and Kuryakin.  The Thrush agent was scheduled to arrive in ten minutes.

Deciding to keep them around, “Sir, I’ll get an employee to take you on tour.”

Soon, a young girl came out smiling at them.“Gentlemen, I’d be more than happy to show you around.”

The two followed the girl into the factory.  As they passed the employees, one of them gave them a questioning look.  “Do you get the feeling, something isn’t right?” Illya asked.

“There goes that Russian’s pessimistism again.  Just enjoy the tour,” Napoleon commented as Illya stopped to examine the chocolate waterfall.

The men followed the girl starting with a selection of the different beans used.  As she explained each step, Illya became engrossed.

While the men were touring, the agent arrived.  The clerk quickly told him about Napoleon and Illya.  Smiling, he said, “Central will be happy.  Just leave it to me and call Carl for backup.  Those two won’t know what hit them.”  Within a few minutes, Carl and the carrier entered the factory.

The UNCLE agents had just reached the large pot where the mixture for Chocolate candy was cooling.  It consisted of cocoa liquor combined with extra cocoa butter, sugar, milk, vanilla, and emulsifiers. Glancing into the pot, a bullet flew passed Illya's head. 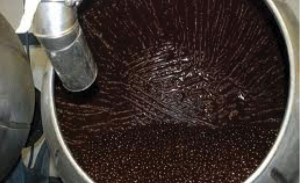 The men ducked, tipping the container over on top of themselves.

Napoleon and Illya fell  under the dense chocolate mixture. the Thrush agents hurried guns drawn to capture the UNCLE agents.  As they came close enough, Illya kicked out his foot, forcing Carl to bump into the agent, knocking them into the chocolate.  Soon the four men were rolling around attempting to best the others.

A shot rang out, causing all the men to look up.  Before them in a bright yellow dress, white GoGo boots, and a gun was April Dancer.   Mark Slate stood next to her.

When the carrier attempted to reach out to grab April, she threatened.  “You get chocolate on my outfit, and there will be hell to pay.”

“I’d listen to her mate, no one messes with her clothes,” Mark warned.

April made a quick call to UNCLE requesting retrieval and clean suits Napoleon and Illya. As the prisoners were removed, the carrier grabbed April’s dress, creating a chocolate mess.  Bringing her knee up, the carrier yelled, grabbed himself, and was removed bent over.

Mark looked at the chocolate-covered top agents, “What are you gents doing here?”

Illya glared at Napoleon, “He thought it would be a great idea to tour a Chocolate factory.”

“Why are you here?” Napoleon asked.

“We were assigned to get the microdot,” Mark smiled as April glared at her chocolate cover dress.

April huffed, heading toward the door. “I can’t wait to interrogate those two,” she grumbled.

“Glad she’s not annoyed with me,” Mark said, following her out.

After the men showered and changed, they were leaving the factory when their guide stopped them handing each a large basket of chocolate candy.  “We’re sorry about the mess,” she said.

“No problem, my dear.  Perhaps I could take you to dinner to make up for the mess we made.”

Smiling, she handed Napoleon her number while Illya rolled his eyes.  As they walked out, Napoleon was heard saying, “You don’t eat the ears first.” 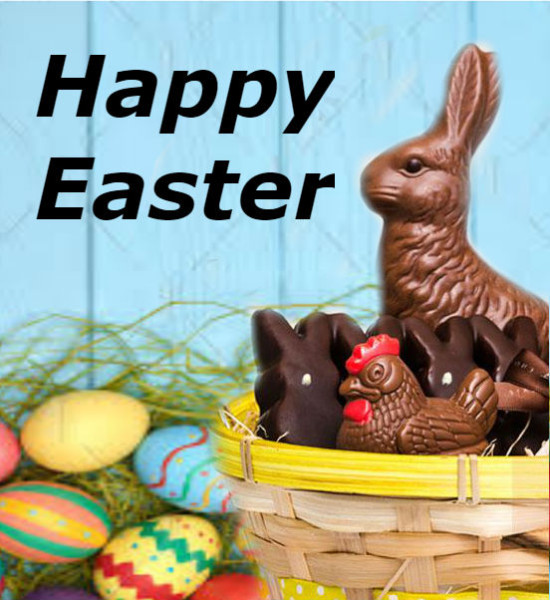 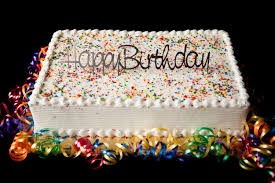 Enjoy your birthday and stay safe

Sorry if I didn't answer any entries this last week, but I sent it with my partners to convert our clinical and simulations from personal to on line.   This meant we needed to make sure they met the requirement for the courses.   New questions that included critical thinking, videoing assessments of partners, SO, family to prevent them getting ill.   For simulations we need to find older silmulation that the students will answer critical thinking questions for and what they would have done in each situation.

Myself and my partners did this with text, phone calls, emails, and one day in a room for 60 people the 4 of us sat at each corner and worked that way.

I spent some time today just reading that were nursing.  Tomorrow we open all the programs for the students, and I think listening to complaint and unhappiness.  If they look at what we did they will find it is actually less that they normally would have done.

Everything is locked down here except food stores and critical needed area, so our businesses are getting creative.   I've been wanting to make a wooden sign for the camper.   I had designed it, but never had time to get to the business to do it.  So they developed a order and pick up.  The wooden sign with the stencil and all the paints, and equipment was pack up and dropped in my trunk.

Have glass to organize and sort for my kiln, and designed to create for my stain glass.   All set for time to do things, including correcting nursing papers.

Hope you all are doing well and surviving.

On March 30th, I head over to Ireland until April 9th with a tour group.   I was to go with a friend, but her husband became ill so going by myself.  The 6 hour difference means we sleep on the way there and when arriving, we'll be ready to go.

One of the most exciting part for me, is seeing a castle on of my mother's family built in the 1300.

Yesterday I received my ticket, so it a go now.   Can't wait.

If anyone wants a postcard (or your child does) just email me you address at patkrupski@gmail.com.

On Sunday we were snowed in.  Tons of snow, inpassable roads, power lines down, and stuck in the house.  But then you look at the window and nature takes your breath away. 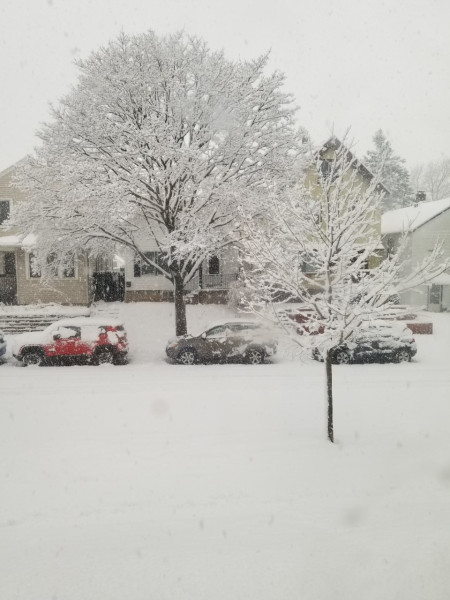 “I beg your pardon.” The icy blue stare did not beg pardon, rather it demanded an explanation.

“I, umm… well, you see…” The poor young woman was attempting to pacify a very unsympathetic passenger in the first class section of this flight.  He was good looking, but she dared not think he thought the same of her.  He appeared to be a very hard man to please, and she had no wish to find herself answering to him or any complaints he might make regarding her ability to do her job.

“That is not a sufficient explanation, certainly not a correction.  I asked for a martini, this is …’ He handed the glass back to her, his fingertips holding the stem as though it were contaminated.

“I do not profess to know what this is, exactly.  Apparently you are not trained as a proper bartender, it will be noted in my report to the airline.” She practically sucked in a breath of air, much to her humiliation, as he rolled his eyes in dismay or disgust.

“It is not your fault, fraulein. The company for which you work has not done its job, I will also make note of that.”  She expelled the air she was holding, her heart still beating so fast she sincerely thought she might faint.  What on earth had made her think being a stewardess would be a lark?