Rumors of His Youth A 2015 Halloween challenge story for Lindafishes8

My thanks to: Yelizaveta52  for her great beta job. 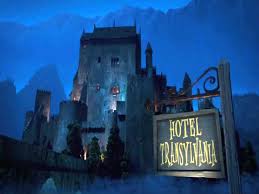 “You have got to be kidding!”  Napoleon exclaimed looking around as Illya pulled into the driveway of the hotel.  “It looked like a place out of one of the late night movies that Svengoolie hosted.”

The area was surrounded by dark, pine forests on two sides while the other side was high, windy pastures. Dark shapes could be seen in the twilight that caused eerie shadows over the hotel.

“And what is a Svengoolie if I dare to ask?” Illya sigh.   He was tired, hungry and not happy about driving to this out of the way place for a meeting.

“Someday I’ll introduce you to the pleasure of low-budget, horror and science-fiction movies and their host.  Svengoolie wears thick makeup around his eyes, mustache and goatee, fright wig, and top hat all black, along with a tuxedo jacket over a bright red open-collared button-down shirt.”

Grabbing his suitcase from the car, Illya turned back toward his partner.  “That is one pleasure you do not need to introduce me too, thank you.  Can we check in please and eat?”

Napoleon laughed following Illya into the hotel.   “You don’t know what you’re missing my friend.”

The Russian rolled his eyes and lead the way into the lobby. “And I do not intend to find out.”

Their contact stated he would meet them that evening in the lobby of Hotel Transylvania.  After the meeting, it would be too late and dangerous to attempt to return to Budapest during the moonless night so they had signed into the hotel until morning.

Illya had seemed bothered about the mission from the second it was assigned and Napoleon had spent their trip teasing his partner that his gypsy blood for the aversion to the assignment.   Napoleon had asked his partner about beautiful Countess Elizabeth Bathory, and Vlad Dracula and other vampires, werewolves, and creatures that went bump in the night until Illya’s threatening glare silenced him.

“Napoleon, if you say one more word about my ‘gypsy’ blood or things that inhabit the night, you will find yourself on the wrong end of a fist.  I have no firsthand knowledge of any of them but learned in my childhood not to make fun of what I cannot see.  Now check us in so we can drop off our suitcases and get to the restaurant before the contact arrives.”

The food was good, and the transfer of information went well.   After safely transmitting the information to New York, the men turned in for the night.

“Did you want me to keep the light on partner so the night creatures don’t get you?”   Napoleon asked with a chuckle in his voice.

“You really should not make fun of things you do not understand.   Now good Night, Napoleon!”   Illya said indignantly before turning his back and pulling the covers up.

“I would really like to meet one of these things that go bump in the night as long as she’s a beautiful woman.”   Napoleon teased.

“Do not wish for something you know nothing about.”  The answering mumble came from under the covers.  “Go to sleep.  The sun will be up in three hours and we need to head toward the airport.  I would like to get some breakfast before he head out.”

With another chuckle, Napoleon pulled up his covers and soon was sleeping.

Waking after what felt like only a few minutes to the enjoyable feeling of someone trying to arouse him, Napoleon opened his eyes to see a beautiful dark haired woman rubbing his body.  Making a slight sound brought her dark red lips onto his and the kiss that followed sent him to heaven and back.

“My partner,” he mumbled still unsure if he was dreaming or not.

“He will sleep my love.  We need not fear him disturbing us.”  The woman whispered in his ear then began to nibble on his neck.

Looking at where he knew Illya slept, all he saw nothing.  “Illya?”

“Shh.  He is fine.”
In the back of his mind, Napoleon knew something wasn’t right, but the things the woman was doing to him were intoxicating causing his mind to cloud.

Shaking his head to attempt to clear it, he asked.  “How did you get in here?”

With a sly smile, she told him.  “You wished to meet me, so I came.  Now kiss me again.”  She leaned in kissing him deeply.

Pushing the covers down further, she paused as he pushed her up.   “I don’t even know your name.”  Confusion still evident in his voice.

“It is Elizabeth.  We have very little time to be together before I must leave.   Let’s not waste a moment.”  She cooed kissing his neck again.  “You are a strong man and I’ve waited a long time for new blood to come to me.”

She began kissing his lips moving slowly toward his neck.  Time seemed to stop as she made love to his body.  Napoleon felt surrounded by her scent, touch and warmth.   His mind was screaming, but he found it impossible to stop her.   Abruptly the kissing went to biting him lightly then swiftly he felt her teeth sink into his neck.  The shock pulled him out of his cocoon.

“You bit me,” he shouted pushing her off.

“Sorry, I got carried away.” She grabbed his handkerchief off the end table dabbing at her mouth.  “You are just so tasty.”

He sat up quickly, “I think you need to leave.   I enjoy playing but this is too much.”

She smiled sadly at him looking toward the window where the morning was beginning to break.  “I did enjoy you.”  She called back dropping the handkerchief on the floor as she headed toward the door mist filling the room causing sleep to quickly overtake him.

Illya woke in the morning by Napoleon’s loud, incoherent murmurs to find him tangled in his bedding with sweat running down his face.  It wasn’t the first time one of them had nightmares so he knew how to handle this.

“Napoleon, wake up.   We are safe in a hotel.”   He called out without touching the man.   It took a few more attempts before the American starting to open his eyes.

Once open, he quickly sat up searching the room for something while brushing unseen objects off himself.

“Where is who?   Napoleon you were having a nightmare.  It must have been Angelique if you are looking for a monster.”   Illya chuckled.

Touching his neck and finding nothing there, Napoleon fell back onto the bed shuddering.   “Not funny partner.  It was a nightmare that’s all.”   Seeing the sun had risen, “We need to get going, now.”  He insisted.

Getting up quickly, he hurriedly dressed and threw his clothes into the suitcase.  “Move it we don’t want to miss our plane.”  He called over his shoulder as he headed to the bathroom.

When Napoleon came out of the bathroom, Illya handed him his handkerchief.  “When did you cut yourself?”

Looking down at the bloody object, “Where did you find that?”

“It was lying by the door.  Do you need me to check your cut?”

“No!” Napoleon practically shouted, “Let’s just get out of here.”

Illya joined Napoleon who was sitting in the car after he left the Russian to check out.

“What is the problem, my friend?”

“Nothing!   Just drive, the sooner we’re out of this country the happier I’ll be.”

Looking over the American, Illya could see he would receive nothing further. Whatever it was bothering the man, the handkerchief had something to do with it.

The sign from the hotel filled the rear view mirror reminding the Russian of the rumors of his youth.  This country had so many secrets that remained unexplained and likely this was another that would fall into that category.  Turning the key, Illya was happy to leave it that way.