A number of people, both children and adults, had been found dead looking as if they had been half eaten.  Stories of a supernatural being attacking the people of the village were circulating in the areas around the village keeping others from entering the area.  Illya and Napoleon had been ordered to Belarus to see what Thrush was up to when it became known that they were in the area where the killing had begun.

The agents had been in the police station getting an update from the sergeant when a report of screams and cries of pain was called into the station.  Arriving at the address, they found a man, woman, and two older children on the downstairs floors torn apart and pieces of them missing.

The officer looked around before saying, “Katrina is missing.”

“Who is Katrina?” Illya asked.

The men had split up looking for the girl, and that is how Napoleon wound up sitting on the bedroom floor attempting to convince the child to come out of the closet.

Flipping open his communicator, Napoleon said, “Illya I need you upstairs in the bedroom now.”

“Nothing I’m sure your knowledge of Belarusian can’t take care of.”

“So, my knowledge of some meaningless language will get us out of a mess again.”

“Fine, I admit your trivial knowledge helps at times.  Now get up here quickly.”

Illya arrived and kneeled next to his partner.  “The problem?”

Nodding his head toward the closet, “The girl is terrified, and I can’t communicate with her.”

The child voice trembled as she said faintly, “Katrina.”

“What is she trying to say?” Napoleon looked toward his partner.

“Later, right now we need to make her feel safe.  Яна ўжо не тут. Мы будзем абараняць вас. Прыйдзі да мяне (She is no longer here.  We will protect you.  Come to me?)” Illya assured her and held his hands out to her.

Slowly the child crawled out into the Russian’s lap and wrapped her arms around his waist.  She was sobbing and trembling severely.

“Hand me one of those blankets, Napoleon.   We need to get her out of the house quickly without seeing the mess downstairs.”

Wrapping the child up, the agents left the house after telling the officer that they would be heading toward their hotel room.  Once there, they calmed down the girl, who fell asleep from exhaustion.
After assuring the girl was sleeping soundly, Napoleon asked, “What is this Baba-Yaga?”

“It is not an it. She is a Slavic ogress who takes and eats her victims.  Usually, it’s children, but she has 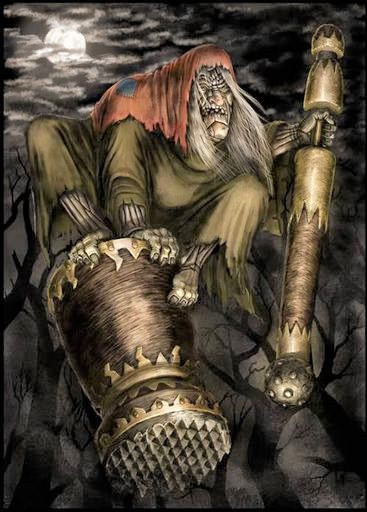 “Another folk belief, Illya?  Don’t tell me you believe it.”

“Call it what you wish but know many have fallen to her justice.  We need to get some rest if we hope to catch up with Thrush in the morning.”

At four a.m. Napoleon needed to use the bathroom, so closed the door quietly but firmly not to wake up Illya or Katrina.   Hearing a crash and then hissing sound, he grabbed a towel, wet it, covered his mouth.

Running into the room in time to hear someone running down the hall, he saw Illya attempting to sit up but falling back from uncontrollable coughing.

“They have Katrina,” Napoleon yelled to his partner.  He threw the wet towel at Illya as he grabbed his pants attempting to put them on as he ran after the flowing gown disappearing into the stairwell. “Catch up when you can.” He called back giving chase.

Napoleon could hear Katrina crying, and the person demanding she ‘shut up.’  The UNCLE agent could see the torn, dirty dress, and a mask on the figure racing into the forest behind the hotel.  The voice told Napoleon that it was a man, and once he was a little closer, he could tell it was a man dressed as Baba-Yaga.

“I am leaving now,” the Russian answered with a cough.

“He’s heading into the woods.  The man is dressed as that ogress you told me about.  I’ll keep my tracer open, hurry up.”

The deeper the men raced into the wood, the darker it became.  It was Katrina’s cries of Baba-Yaga, мне не баліць. Калі ласка, дайце мне сысці. Я добра, я абяцаю (don’t hurt me. Please let me go. I will be good, I promise)” that allowed him to follow the two.

“Shut up you brat, or I’ll bite your head off and eat it.,” the Thrush agent threatened the girl resulting in her cries to increase.

Holding a sobbing Katrina as a shield, Napoleon finally caught up to the man dressed as Baba-Yaga.  Napoleon demanded, “Put her down this moment.”

“You won’t shot, Solo.  Even with your skills, you could hit her.”

Napoleon smiled at Katrina, “You’ll be alright, I promise.”  A shot ran out, and Napoleon fell a hole where his heart was.

The Thrush agent threw Katrina into a hole that was beside him then stared down at Napoleon. “Solo can’t wait to brag I killed you,” he crowed. 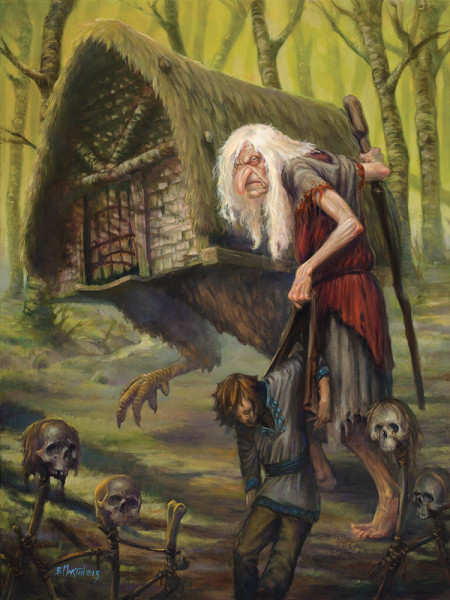 swindler, evildoer.  You will not be bragging.  This is my forest, and you have defied it.  Now you shall die,” a malevolent laugh sounded through the trees surrounding the man.  A second later, teeth appeared above him before closing around the agent’s head. His screams diminished short as his head separated from his body.  Blood spattered around the ground soaking into it.  Suddenly the ogress appeared in an area surrounded by a fence of skeleton heads and a chicken-legged house dancing.

Arriving after the Thrush agent was killed, Illya lifted Katrina from the hole she had dropped into, and she ran towards Napoleon’s lifeless body.  Illya quickly followed her toward the fallen agent.

Illya sat down beside his partner and placed Napoleon’s head on his lap tears running down his face.  His partner had saved Katrina but had given his life to do it.

“Baba-Yaga,” Katrina cried out crowding into Illya as she saw the ugly woman beside them.

The being sat in the air with her pestle and mortar in each hand. In her iron kettle, they could see the dead Thrush agent’s head and blood dripping on the ground. Her hut with its chicken’s leg danced around her.

Everything stopped moving as Baba-Yaga who stood above Illya and Napoleon, a look of confusion on her face. “Mortal, why do you cry for that man?”

Surprised that Baba-Yaga spoke to him, Illya explained.  “He is my partner who has given his life this time to save another.”

“Is that not his job to die for others?”

“It is the job he chose to do. He has risked his life to help others frequently.  This time he failed in surviving his choice.”   Illya clarified.

“He is a good man then?” the ogress questioned.

“He is one of the best. His only wish was to serve others,” Illya defended Napoleon.

After thinking about what she learned, she asked. “And if you had a wish, what would it be?”

Without hesitating, Illya answered, “I would wish that I was the one laying him instead of him.”

“But aren’t you a good man, also.  I saw you trying to save others.”  She challenged rubbing her huge distorted nose and showing her long bloody teeth.

“Perhaps, but much of what I am and know is because of him.  He has taught me how to be more human and care for others more than myself.”

The six-year-old only sobbed louder.  “Do not test the child,” Illya demanded.  “She is frightened enough.  Either do what you plan to do or leave.”

“Oh, a brave man as well as a good man.  You shall have your wish, Russian.  Take the child and your partner and leave.   Do not enter my forest again or the outcome will be different.”

With that Baba-Yaga disappeared along with her house.  The agent and child turned back to Napoleon as they heard him inhale deeply.  They watched as the bullet hole disappeared.

“But, the Thrush agent was dressed like her.  What do you mean?”

“Later Napoleon.  We need to get Katrina to safety.  I am sure this will be another report buried in File 40.”

Napoleon glance at the shaking girl.  Standing he lifted her and head toward the road knowing now was not the time to question what happened.  He knew Illya would tell him later, although, at the moment, he wasn’t sure this story was one he wanted to hear.

As they left the forest, they heard vile music, dancing feet, clicking teeth, and a wicked laugh.  If the two agents moved faster, they would never admit it.