Sailing the Sea on the Redbeard

Written for the Spook Me challenge 2019. 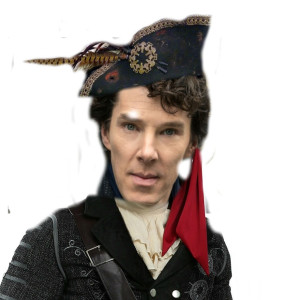 “Are you okay, Captain?”  His first mate, John, asked.

Nodding, “Aye. Must have hit the mast, though I don’t remember it.”  Taking a deep breath of the sea air on the bridge of the Redbeard, he smiled.  “Beautiful day for a raid on England’s enemies, I believe, savvy.

“Being a privateer takes some of the fun out of being a pirate, but at least we will avoid the hanging noose from the yardarm.”  John sighed.  “If it weren’t for Mycroft, we could end up that way.” 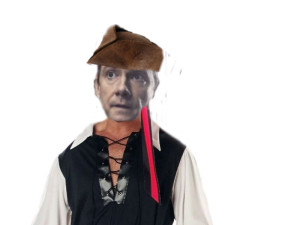 “Don’t bring up that Bilge-sucking brother of mine, unless you want to ruin my day. He tries to tell us what to do, yet he is nothing but a Landlubber.” Sherlock spat unto the deck at the mention of Mycroft.

John chuckled. “Aye Captain.  By the way, your cabin boy, Lestrade, was looking for ye.  Something about rum and that scallywag Anderson.”
“Aaaarrrrgggghhhh, get me Lestrade.”

Lestrade, a seadog who was injured and normally would have been left abandoned someplace, but Sherlock had served under him and gave him a place on his ship.  Lestrade knew he wasn’t up to sailing as the crew did but serviced Sherlock as best he could. He came up from the galley, “Aye Captain.”

“What happened with that son of a biscuit eater, Anderson?”

Looking up at the crow’s nest of the Redbeard, “He is up there.”

“SAL!” Sherlock yelled, calling one of the mates, “Get that scurvy dog down from there before I hang 'im from the yardarm.”

“He was upset about something you said yesterday.  He climbed up there three sheets to the wind.”  Sal explained.

“I don’t care if he’s four sheets. Just get him down now.”

John said, “I’ll get the idiot down,” before beginning to climb the rigging.  Halfway up, he called out.  “Captain, ship ahoy.”  Pointing astern.

Sherlock grabbed his spyglass.  “Shiver me timbers! Its flag is the jolly roger, and the lower banner is Moriarty’s ship, the Spiderweb.”

The sailors stopped what they were doing and stared at the bridge.  They had all heard the stories of the evil pirate who was turned into a Ratman by a witch for crossing her, his snake-man first mate, Seb, and a ship full of skeleton pirates.

John had slid down beside Sherlock.  “Are you sure?”

“Mr. Watson, I don’t make mistakes,” then looked at the assembly before him.  “Don’t just stand there. What are you waiting for?  Batten down the hatches, a storm name Moriarty is approaching.”

Although scared of the tales told about Moriarty’s crew, the sailors began moving to secure the ship.  They knew they couldn’t escape the Man-of-War that was coming after them.

Cries of “Pull up Jacob’s ladder, Lower the sails, and secure the barrels” could be heard. 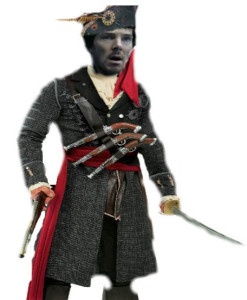 As the Man of War approached, Sherlock, cutlass in hand, stood on the Redbeard’s Bridge and made the decision. “Mates avast ye. I will not look down if you wish to vacate the ship.  Moriarty and his ship are cursed.  I intend to put an end to him and his terrorizing of the sea.”

He waited, yet only Anderson, who had fallen halfway down the rigging unto the deck, headed toward the side boat until Sal pulled him back, “Don’t you dare,” Sal hiss in the intoxicated man’s ear.

“What do you say?  Do you stand with the captain and me?” Watson called out. 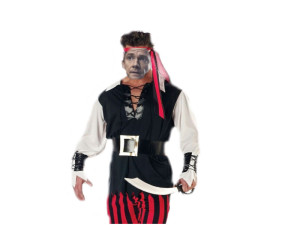 “Splice the mainbrace!” After each man had a mug of rum, Sherlock raised his, “Success to us, and if not, may you all received the booty you desire in the next life.”

The men raised their mugs, “To victory!” they yelled.

After they had drank to their success, “Now weight the anchor, we stand and fight and need moving power.  It’s time for someone to put an end to that devil and send him and his crew to become shark’s bait.” 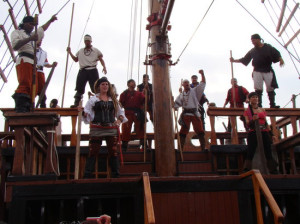 As the Spiderweb came closer, Sherlock yelled.  “Run a shot across the bow.”

The shot headed toward the Spiderweb, which abruptly disappeared only to reappear in a different closer spot in the sea.

The second shot was released only for the Spiderweb to vanished once more to resurface right next to the Redbeard. 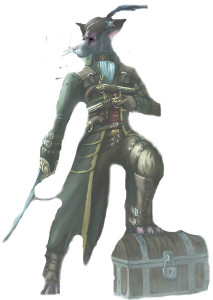 Moriarty stood on the bridge, an evil grin on his face, Seb at his side.

“Sherly, we finally meet.  I have waited a long time to encounter you.”  Moriarty said in a voice that was sweet yet underneath threatening.

“I can’t say the same. What is it that you want?”  Sherlock asked.

Mocking, “Why you, of course.  I need a new bedwarmer, and you are just perfect for the position.”

“I’m sure you didn’t come all this way for just me.  What is it you really want?”

“As I said, I want you, Sherly.   Also, your Letter of Marque that your idiot of a brother refused me and the loot your ship carries,” he screamed then went back to his sarcastic self, “After all, I enjoy killing and want England to allow me to continue without them always hounding me.”

“Then your men will die until you give me what I want.  One at a time,” Moriarty looked over at his crew. “Depending on how they lived their lives, they may become one of my crew.”


Sherlock looked over his men. The joy of minutes ago was replaced with fear.   “Mates, the choice is yours.  I will not condemn you to that type of life.  What is it that you want?”

Although there was some grumbling, almost as one, “We follow you into the fight, Captain.”

Anderson left the sides of his mates, “I serve you, Captain Moriarty.

“No Anderson,” Sal yelled to his mate.

Ignoring the call, he climbed aboard the Spiderweb, where his flesh dissolved, leaving only the skeleton of the man remaining.

“No!” Anderson yelled as the last of his flesh evaporated, “I came willingly.”

Mad laughter came from Moriarty, “You came as a coward and was rewarded appropriately.  Your mates who stayed and have stayed well-intended will receive an honorable death.”  As the laughter continued, Anderson’s bones crumbled to dust. 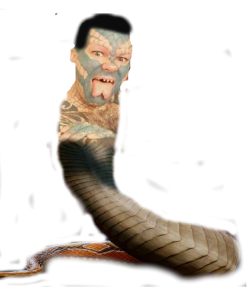 “You have your answer, Moriarty.”  Sherlock raised his gun and sword, “We fight.”

“Sebbie, come here,” Moriarty called out before giving the order to attack.  The half-man, half-snake, slid up to him.
“Yesssss Sirrrrrr,” Seb hissed.

“Your job is to take the one thing that Sherly values above all else.” Moriarty’s grin widened.   “As you wish Sherly.   Their deaths are on your head.”  Turning to his crew, he called out.  “Captain Holms is mine; otherwise, give no quarter and scuttle that ship.”

The red flag raised as the skeletons lifted their cutlass and yelled, “feed the fish” before boarding the Redbeard where they were met by its crew.

As the fight began, Watson and Lestrade rushed in front of Sherlock.  “Get out of my way,” the Captain demanded.

“Ney Captain.  We’ll protect you with our life.”  Watson shot back.

Pushing them out of the way, “I will not let my men die while I hide behind your skirts like a woman in need of protection.”  The three stood side by side, turning back all who attacked them.

As the crew fought the invaders, men and skeletons fell.  The men who tried to live as best they could stayed down.  Those who lived evil lives or were men who cared for no one else, had their flesh dissolve and joined the Spiderweb’s crew.  The bones of the skeletons who fell at first separated until moments later they reknitted and rejoined the fight.

Meantime, Moriarty stood on his bridge, crackling like a witch as Sherlock tried to reach him.  A cry from beside him, had Sherlock glance toward Lestrade to see him falling, a skeleton pulling a sword from his stomach. “Lestrade!”

“Blow that man down for me Captain,” the cabin man called up as he rolled in a ball to attempt to stop the bleeding.

The men fought for almost two hours before the skeletons had the Redbeard’s crew and officers surrounded.

Only when it was safe did Moriarty jump onto the ship, grinning as if he was a cat who stole the milk.

“Oh, Sherly, look at your crew.  Many of them are dead or soon to be.”

“And how do I save my crew?”  Sherlock asked.

“Give yourself and your ship over to me. Then I’ll let them go,” Moriarty grinned as he gave his answer.  His red beady eyes glowed with delight.

“And how do I know you’ll keep your word?”

“After all, I’m a gentleman. You can trust me.”

Sherlock laughed, “You’re the devil, and your word means nothing.  Allow my men to board the dinghy and get out of sight. Then I’ll give you what you want.”

Looking down shyly, Moriarty said sadly, “You don’t trust me.”

“You’re not fooling me.  As soon as I give you what you want, you would order them killed.”
An evil grin on his face, “You know me too well.  Seb!”

With the yell, John screamed in pain.  Turning toward his first mate, Sherlock saw Seb’s teeth deep in John’s neck.

“John,” he yelled and hurried toward him as Seb released John, who fell to the ground pushing his cutlass into the snake’s chest and pulling it down with him.  As John hit the ground, so did the dying Seb.

Lifting his friend, Sherlock held him tight.  “Don’t die John. I need you.” 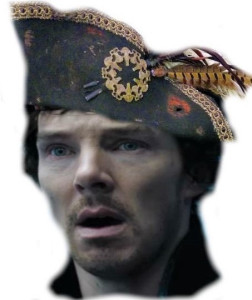 Lestrade managed to stand holding his stomach, let out a yell as he swung his cutlass, beheading Moriarty before falling dead himself.  The skeleton’s crew bones began to separate, fall, and dissolve.  Sherlock glanced toward the cheers of his freed crew before looking back at John.

“Don’t worry about me.  I await my judgment when I cross over.” Before coughing up blood. “It’s been an honor to serve under you.”

“Sherlock wake up, your screaming,” John called, standing in the detective’s doorway gun in hand.
Sherlock slowly opened his eyes to find himself in his bedroom on Baker Street.

“That must have been one nightmare you were having as you were screaming at the top of your lungs,” John said.  “Need to talk about it?”

Shaking his head, Sherlock laid back down, still shaking a little.

“How about I meet you in the living room with some tea?” John offered.

“Give me a few minutes, and I’ll join you,” Sherlock said, his voice just above a whisper. “If you wouldn’t mind, can you put that gun up?”

John looked down at his hand and gun he didn’t realize he had grabbed when he heard Sherlock screaming.

Still shaking, Sherlock entered the living room to see John had set his cup of tea beside his chair.
“Thank you,” the detective said, sipping the tea.  “It was nothing really.  Just a dream about pirates.”

“And that made you scream my name as if I were dying?”

“Oh, so I was.  As you can see, I’m fine.  Maybe Mycroft needs to stop sharing stories from your pirate adventures.”  John suggested.

Sherlock rose and sat on the couch next to John.  After placing a small kiss on his lips, he laid his head on John’s lap.  “Not necessary.  I enjoy remembering my childhood with him now that my memories of those times are coming back.  Just promise me, you’ll stay away from snakes for a while.”  Then closed his eyes falling back to sleep.