Inocencio Oreato from the Babyhead Fungus Affair returns looking to get even with the agents.  From the small town of Llano, Texas to the wilds of Canada, UNCLE attempts to put an end to a fungus which once more is designed to make people mindless slaves.
Thanks to yelizaveta52 for helping me clean this up.

Although the closest airport to Llano was Killeen-Fort Hood Regional Airport, the men landed at San Antonio International Airport which was much busier and further away.

They hoped this would prevent Thrush from spotting them coming into the area before they were ready to make a move. The car they rented had shaded windows, a common feature in Texas and another safeguard.

Within minutes, they were driving through the rugged hills. Both sides of the road were rocky areas filled with desert plants. The rocks and ground were painted with various shades of red, giving it a Mars like quality. Patches of cactuses with brilliant yellow, red, and orange flowers littered the fields. It was so different from the cold weather and bleak look of New York.

Arrangement had been made to allow them to stay in Samuel's sister's house again. It was hidden in the woods at the top of a hill. The old house that been remodeled with a driveway that snaked up the hill, a code locked gate and nothing else around.

After they were settled in for the night, Illya complained about being hungry. "How about going to the restaurant we visited last time we were here?" He suggested remembering the food from the last time he was in Llano causing him to drool.

The Cooper's Old Time Pit Bar-B-Que was famous for their beef brisket, ribs, pork shoulder or chicken cooked on 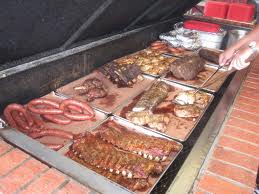 outdoor pits of wood embers. Each person was able to pick out their own meat.

The steaks and chops were over an inch thick and at least eight inches round. To finish up the meal, there was a choice of salads, potatoes, veggies, and other extras for the price of the meat. He couldn't wait to get into town and eat.

"You accuse me of thinking with a specific part of my body at times my friend, but you think with another part of your body. We can't be seen in town at this time until we see what is going on." Napoleon reminded him.

The frown on Illya's face showed his disappointment. "You are correct."
"Hey boys, how about I go into town and get take out. Just tell me what you want and I'll bring back the meat and the fixing." Samuel offered.

"I thought they did not do take outs," Illya's disappointment still evident in his voice

"I'm the sheriff here. They'll do it for me. Just write out a list and I deliver it."

Illya grabbed a piece of paper and began writing to his partner's laughter.

"He'll be your friend forever," Napoleon said as he added a few lines to the paper.

The following morning the men looked down upon the Thrush compound. The openness of their presence in the Valley indicated they were expecting UNCLE to make an appearance.

The beautiful but hilly, rough terrain made walking slow and difficult. With the sharp vegetation, any slip could result in small cuts making the move unseen down the hill difficult. Still, they still managed to get down unseen and uninjured.

When they were within feet of metal barrier, they could see it had transformers on the top which could be electrified. However it had not been turned on and the guards were leaning on it smoking cigarettes with their guns resting on the ground.

"Do you get the feeling we're expected to try to break in?" Napoleon asked, lying in the bushes surrounding the area.

Rolling his eyes Illya at the obvious answer, he said. "Either that or Thrush has hired the least intelligent men around. They are making it very easy for us to enter the compound."

"I say we check things out better before we make a move. I'd rather not end up as Oreato's guest again on his terms." An involuntary shutter shook his body remember how close to death he came last time.

The rest of the day to the two UNCLE agents spent gathering data of the area, the number of men in sight, their routine and type of weapons.

Tired, hot and dirty they made it safely back to the car. Napoleon disliked the sandy red soil and rocks and made it known by complaining all the way to the Texas Ranger station. They were stopping there on their way to the safe house.

Napoleon complained. "At least this is one of my old suits."

"I suggested you change your outfit before we head out," Illya snapped at him, tired of hearing him complain. "But no you had to keep your suit on."

"I do have an image to maintain you know." And without looking at his partner said, "And don't roll your eyes at me. At least my suits don't look as if they were slept in."

A snort was Illya's answer along with mumbling under his breath

"What did you say?" Napoleon shot back.

"I said at least I do not have to justify my clothing expense account each month."

"No you just have to keep explaining why your equipment account is overdrawn. Between getting caught and blowing up everything."

The two men look at one another sheepishly.

"Sorry partner, I didn't mean anything. I'm just hot and crabby from the desert sun."
"As am I."

An unspoken understanding passed between the two men ensuring that each accepted the others feelings.

Arriving at station, they gathered maps of the area and reported to Samuel what they found.

"So what's the next step?" Samuel asked.

"We'll watch for another day to make sure we have their routine and then try to get inside without getting caught." Napoleon explained.

"What do you think your chances of getting out safely are? I mean they seem to be expecting you."

"Depends on what they want. To capture us or to kill us? Either way we've been in worse spots and made it out."

"Personally I think we should just go in and clean out that nest of varmints." Samuel declared.

"The problem with that is we need to find out what they're up to and put a stop to it." Illya explained.

"And if you find that it needs to be destroyed?"

"Don't worry. My partner has it covered with a trunk full of explosives. Illya never goes anywhere without his noise makers."

"We're going to head back to be safe house now to get some rest so we can start fresh tomorrow morning. I'm going to take the first shift as Illya needs to finish up a few preparations. Then he'll take the second while I complete what I need to."

"Do you have enough food at the house? Oh would you like me to bring some later on." Samuel asked as they were walking out the door.

"I would not mind another supper from Cooper," Illya said eyes widen in anticipation

"Same last night would be great," the Russian said thinking of the pork chops, steak and baked potatoes he had. "Although I wouldn't mind some chocolate cake for dessert."

"I'm not sure where you put it son, but okay. And you Napoleon what would you like?"

"A steak would be great Sam. We'll see later." They headed toward the darkening parking lot.

Exiting the Texas Rangers office the agents noticed how dark it had become. As they walked towards their car Illya stopped pulling his gun as he listened to something. Knowing his partner's sense of danger, Napoleon listened after drawing his gun also.

Then Illya heard the sound again, this time the breathing was coarse and the sound of footsteps sneaking across the parking lot.

One man sprung from the darkness swinging a rifle butt toward Napoleon's head. He jumped back but not fast enough. The rifle caught him on the shoulder and sent him to the concrete causing his shoulder to feel as if it was on fire.

Leaping to his feet, Napoleon grabbed his assailant's head using the top of his head to ram the man face breaking his nose and causing his opponent to lose conscious.

While Napoleon was fighting his man, a second man kicked out trying to hit Illya in the head. He managed to duck aiming his fist toward the enemy's ribs. When he hit the attacker, the man grabbed his stomach going down on his knees out of breath. A fast chop to his neck managed to send him to the concrete unconscious.

Firing after the rest of the men who were beginning to retreat, Napoleon noticed blood running down Illya arm, "Are you okay?" He called out.

"It is just a flesh wound. Do not worry about me. We need to get them before they get away."

A bullet flew passed Napoleon's head destroying the car window behind him. Diving to the ground along with Illya the rest of the Thrush agents were able to escape.

Rangers came out of the office just in time to hear the attackers car peel off.

Helping up the UNCLE agents, Samuel said, "I do have to say when you two are around it gets awful noisy. Are you two okay?"

"I guess they know you two are in town, so no need to sneak around anymore." Samuel said.

"Come on back inside so we can fix up that arm, and you can tell me what to charge these goons with."

"You go ahead Napoleon, I just want to check out the car and make sure they did not do anything to it."

Nodding the American followed the prisoners toward the building. 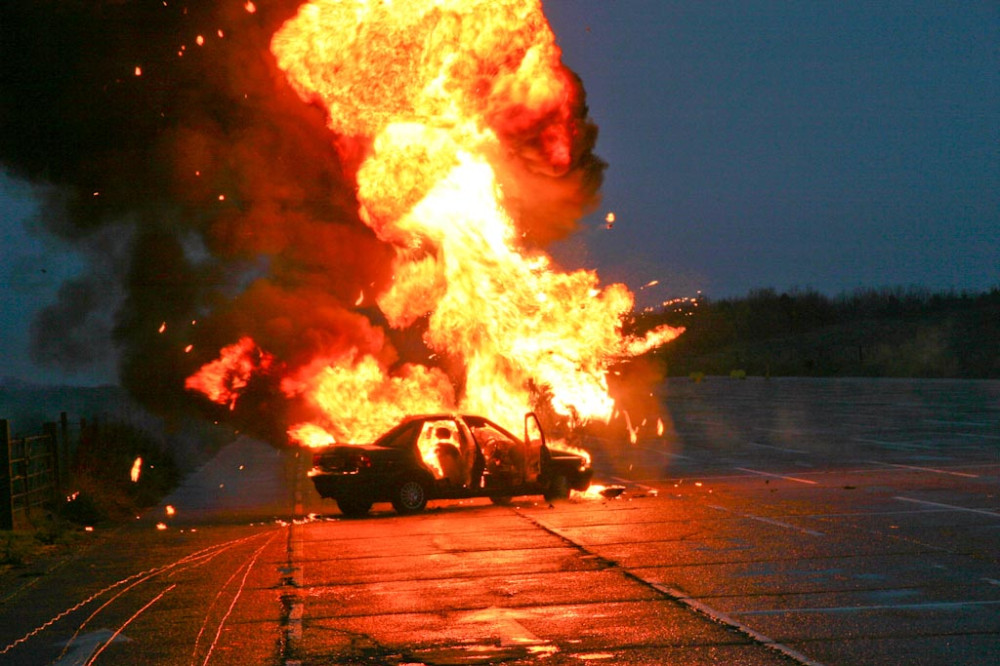 Walking toward the car, Illya heard the explosion before seeing the fire. He dove to the ground as the heat and the rock rushed up to him. Feeling the flames reach him, he felt his back burning and raised his hands to protect his head.

Illya could feel Napoleon touching his shoulder and see his mouth moving but heard nothing. And then everything went black.

Waking up he could hear the sound of medical equipment and the antiseptic smell of medical.

"Illya, come on partner, open your eyes and joining the rest of us."

Illya's vision was blurred but he could see Napoleon in the plastic chair next to him.

"I am still alive?" His dry voice croaked out.

After giving him a sip of water, Napoleon said. "For a while there we weren't sure but the doctors said although you'll be in pain for a while you will survive."

Illya began to rise but Napoleon pushed him back down. "Oh no you don't! The doctor said you need to rest for the night. If you're a good boy they'll release you in the morning."

Letting a moan escape Illya laid back down touching hair as he did. "You let them cut my hair, how could you!"

"I wasn't in the room when they did it to get the burnt edges off. Besides they only trimmed it. It's still its normal shaggy self."

Giving Napoleon a sour look Illya patted his hair and closed his eyes falling back to sleep from the medications he was receiving through his IV.

A little later, Napoleon heard a soft voice saying, "I am hungry and I do not want jello."

Laughing the American said, "How about a nice roast beef sandwich?"

He pulled a bag out from behind his back and handed the bag to the Russian. The smell coming from it had Illya stomach growling.

"The old man wants me to give him an oral report so enjoy your sandwich and I'll be back after speaking to him."

Leaving his partner the CEA headed toward communication