Illya plopped a oblong white box with number keys on top of the papers on Napoleon’s desk. 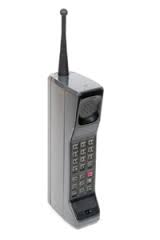 Picking it up and examining it, Napoleon asked, “What’s this supposed to be?”

“A new technology called a cell phone that won’t be available for to the public for a number of years yet.  It works on a battery and bounces off satellites to send a signal to other phones.”

“And we will use it for what?  I mean we have our communicators.”

“But there are times we are cannot use the communicator.”

“Where would we carry it?  It’s so big and balky.”

“We are working on making it small and more efficient.”

“Come back when you figure it out.”  Napoleon said handing it back.

“I believe we are going to have to force you to join the technology revolution kicking and biting.”

“You can try, but I’ll never embrace technology.”  Napoleon declared.

Years later when UNCLE called them back to help.
“So Napoleon, what are you doing now?”

“I own a computer company.”