Napoleon watches his partner on the beach. An Easter Egg for Svelanacat4 who wanted something rather slash (but gen is fine, too) with sea-shell and chocolate.. Hope this is makes your Easter enjoyable.
Thanks to Spikesgirl and Yelizaveta52 for their beta work. Written for the Easter Egg challenge on MFUWSS.

Napoleon and Illya had a few days down after their last assignment and were spending it on the beach in Florida far enough away from the Thrush location they destroyed in case someone was looking for payback.

Illya was walking along the beach picking up sea shells placing them in his folded shirt.  Napoleon watched smiling at how young and innocent his partner looked at times like this.  His gaze floated over to the chocolate Easter bunny he had given Illya remembering the grin on the Russian’s face as he bit off the ears, chewing it with such a simple enjoyment.

After Illya returned, Napoleon watched his partner touch as each shell lovingly.  He ran his fingers over them tracing the designs and texture.  In-between he would take a small bite from his chocolate rabbit.

Napoleon joined him on the couch, hips and knees touching. His hand was lying on Illya’s thigh.

He asked, “Why sea shells?”

“We are always in such a hurry going from place to place while never really seeing what there is to discover.    When I look at these shells, I see all the wonderful treasures hidden in them as they each hold its own message of where it was and saw.”

“I never thought of them that way.  Sometimes, Illya, you surprise me with that part of you that you let out so seldom.  And the chocolate, I love how you close your eyes taking pleasure in each bite.”

Aware that he was blushing, Illya grabbed his towel inviting Napoleon to come swimming raising his eyebrows in a  suggestive manner.

“You know my feelings about water.  Go enjoy yourself.  I’ll see you later.”

He gave Illya a demanding kiss that promised more later then watched his lover head out the door.  While Illya enjoyed nature and soon was out in the sea swimming once more, Napoleon decided to roam the small shops in the small town where they were staying.

He wanted something special to show Illya how much he cared.  Nothing in the stores called to him, until he stepped into the Confection shop.  There on the top shelf he saw it.

“I’m sorry sir.  It’s only for show.  The artist added ingredients to make it permanent.”

“How much will you take for it?  It’s perfect.”  He beamed his irresistible smile.

The girl turned it over and quoted a fifty dollar price with a look that said she was sorry it was so expensive.
Napoleon didn’t hesitate.  He pulled out the money accepting the item after having her placing chocolate pieces inside and gift wrapped it.

Later that night as they lay in bed, Napoleon handed Illya his gift.  Watching Illya open it, Napoleon 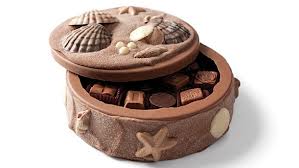 enjoyed the delighted look on his face.  As the wrapping came off, a look of wonder lit up Illya’s eyes.

“A remembrance of our time here.” Napoleon explained.

Illya’s thanks lasted the whole night and spoke more than any words could.