“Did you not ever hear that need is the mother of invention?” A dripping Illya answered the questioning look in the eyes of his partner when he returned to the cave after looking for something to eat. A fire had been started and the cave seemed to have warmed up even with the smell of moisture from the rain.

Napoleon had been severely beaten and tortured.   When Illya helped him escape from the prison he had been held in, they were able to add to their supply of equipment by grabbing a lighter and one of their communicators that was in the pocket of the guard they had knocked out. Napoleon was seriously hurting and had received a knife wound during their escape.

Neither could go much further without some type of nutrition. When Illya had gone into the rain for food, he had insisted that Napoleon try to get some rest. 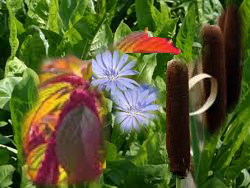 Napoleon raised his eyebrows when his partner had returned with an arm full of leaves, plants, and a broken pail hanging from his arm.

“It’s necessity is the mother of invention and what does that have to do with the mess you have there?”

“Napoleon, Thrush held you captive for over a week barely giving you any food and when they did it was watered down broth. Now we have been on the run for three days before we could call out for help. We are out in the middle of a forest that will take the rescue party at least a few days to reach us. We and especially you need the energy to keep going. The experiment Thrush was doing in the area before we destroyed their base and escaped has killed off all the wildlife. Now we need to eat or we will not make it and this is what we have.”

“But it’s nothing more than weeds and bugs. They can’t be something we can eat. How do you know we won’t be poisoning ourselves?”

“Remember my friend I grew up living off the land and everything that could be eaten was. Are you able to take some of these large leaves and collect the rainwater by the opening? We will need to boil most of this and I think I can form enough of this broken bucket into a usable pot.”

Although Napoleon took the extended leaves, his expression was one of disbelief. His injuries caused him to walk bent over and his hiss of pain could be heard. Illya knew Napoleon would insist on helping even in his shape and not appreciate him refusing the American’s help. Aware that the injured man had to only step outside the cave to get water, Illya continued getting things ready to boil biting his lips not to say something about the injuries.

“Think of it this way,” Illya called out seeing the slump of his partner shoulders as he headed back into the rain. “You are going to have a large salad.”

“I’d rather have meat, thank you.” Napoleon said as he sat down just outside the cave holding the big leaves cupped in his hands forming a bowl.

“That what the bugs and insect are for.”

“What!” Napoleon turned at the cave entrance.

Chuckling at the expression on Napoleon’s face, he continues to get the plants ready to cook.

When enough water was dumped into the pot that Illya had formed out of the broken pail, Napoleon fell down unable to stand any longer.

Checking out his partner quickly, Illya helped him lay down comfortable before continuing to prepare the plants. The water was boiling and Illya added white birch bark to make a pain relieving tea for Napoleon.

“What is all that stuff anyways? If I’m going to eat it, at least I’d like to know its name.” Napoleon asking trying to take his mind off the pain shooting through his body.

To distract him from pain, Illya continued began to explain the collection. “Everything thing here is eatable once we boil it. This is amaranth. We just need to watch out for spines. You seem to enjoy asparagus and this is the same thing just growing in the wild. It great for vitamin C, thiamine, potassium, and vitamin B6, the only downfall, is it will make your urine smell funny.”

“Thrush already did that with the abuse my kidneys took.” Napoleon admitted then seemed surprised when Illya held up the next few plants.

Trying to push himself up led to a hiss of pain.   Illya handed him some of the tea from the pot he had poured into a leaf and helped place it by Napoleon’s lips. 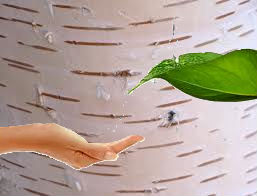 “Drink this, it will help the pain.”

“Birch is a natural pain reliever containing salicylate. That is a compound found in aspirin. It will help with the pain, inflammation, and fever. Napoleon you trust me to cover your back all the time, do you think I would poison you?”

Taking a sip, the American swallowed. A look from Illya had him taking a few more sips until it was gone. Lying back down, Napoleon watched as Illya picked up more weeds.

“That’s a cattail, you’ve got to be kidding, and that other weed has flowers on it.”

“Will you lie back down and let the birch work? Rest until I get this ready to eat.” Illya ordered and was relieved when his partner did just that although his color had become much whiter.

To distract him from the pain, Illya continued to explain his collection. “You don’t know much about your own history do you. Cattails were a staple in the diet of many of the Native American tribes. You can eat all parts of it and it early enough in the year for the top to be eaten like corn on the cob. As far as the weed, it is chicory and the flowers are very sweet. So after cooked we’ll have a great salad.”

Napoleon still looked unconvinced. Yet he was hungry and knew Illya couldn’t be convinced to leave him and meet the rescue team so they had to eat something to survive or both of them would die.

He watched plants being stripped and placed in the boiling water. As the plants began to soften, Illya headed back out into the rain. A few minutes later, he returned with a stick full of ants. Placing the stick and ants into the water, he explained. “They will add a little protein.”

“Wonderful, boiled ants just what I always wanted to try.” The sarcasm thick in his weakening voice as Napoleon’s eyes closed allowing the tea to began to take effect.

A chuckle was Illya's only answer.

Went the items were soft enough to eat, Illya woke his partner. Although Napoleon’s eyes were dull and unfocused, he opened his mouth and ate whatever Illya put into it went told to. After he had eaten a small amount, Illya allowed him to fall asleep.

The next few days went the same way. Waking Napoleon became harder each time and other than a few groans, he seemed to be drawn within himself. Illya managed to get Napoleon to eat a little and drink the white birch tea as often as possible. Even though he kept Napoleon’s knife wound clean, Illya knew there was something internal was wrong. The American was getting worse by the minute.

The rescue team could now get through the storm that had lessened and would be there within a few hours. Trying to get more tea into Napoleon, Illya found he couldn’t wake him now.

“Napoleon do not do this to me. You managed to live this long hold on for just a few more hours.” Illya pleaded. A few moans came letting him know that Napoleon had heard him.

The last couple of hours waiting for rescue weighed heavily on Illya mind. Napoleon was slipping away more and more. When the noise of sliding stones was heard causing Illya to raise his gun keeping it turned toward the entrance. As Mark and April slipped through the opening, they raised his hands in surrender.

Lowering the gun, Illya’s smile that replaced it made it clear that they were a welcome sight.

The rescue had gone smoothly and Napoleon awareness came back slowly.   Bits and pieces of his memory ran through his mind until he opened his eyes to take in the room. He was in a typical medical bed. All his injuries had been treated and bandaged. There was the beeping of the machines in the background and next to him, Illya was asleep in a chair. A soft touch on the Russian’s hand had him waking up with a start.

“I should have known that you would decide to join the living again just after I finished our report,” he teased with obvious relief.

“Solo luck. How long? How bad?” Napoleon whispered his throat dry and sore.

Giving his partner a sip of water Illya said, “Three days here. A few broken ribs, bruises, contusions, and some internal bleeding that they managed to stop also a broken leg. I am not sure how you managed to walk as far as you did.”

The doctor came in smiling at his patient. “Well Mr. Solo, it seems you luck pulled you through again. Good thing it was Mr. Kuryakin who rescued you and knew which plants were the most helpful.”

“How soon can I get out of here?” Napoleon was ready to leave right then if possible and the remind of the food he had eaten was something he didn’t want to discuss.

“Section Two always so impatient. If, and I mean if, you do as asked, you’ll be out in a week if there is someone to stay with you. Otherwise, it will be much longer. Understand?” The doctor crossed his arms waiting for a response.

“I’ll give you one week doc.” Napoleon agreed.

“Good then this week is for resting, eating, and therapy. Now Mr. Kuryakin let’s leave Mr. Solo to get some sleep.”

As the doctor and Illya left the room, a glance at the bed showed Napoleon was sound asleep already.

Illya returned to the room carrying a bag just as Napoleon was about to eat.

Napoleon removed the covering over his dish to find a Chiefs salad under it. Quickly recovering it he pushed it away. A look on disgust coloring his face.

“No salads or vegetables for me for a long time. I’m eating only meat and potatoes. I’m sure your mind can come up with something.”

Illya lifted the bag he had brought in with him. 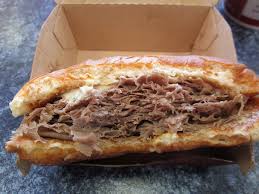 A roast beef sandwich was pulled out and given to the American.

“Necessity might be the mother of invention, but even a mother can be wrong.” Napoleon said taking a big bite out of the sandwich.