Happy Halloween -- Comfort from the Past 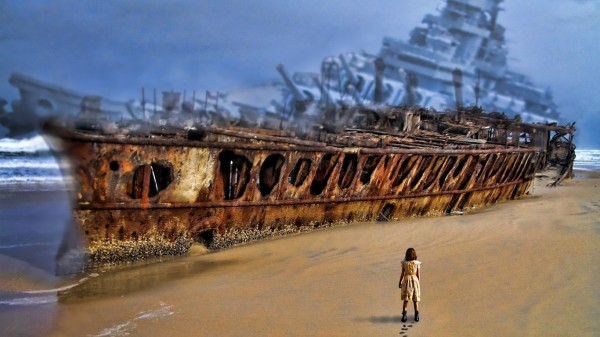 Napoleon received visit from his past, as he lies dying from a Thrush trap.

First written avrovulcan for the 2014 Halloween Challenge on mfu_scrapbook in Live Journal. Thanks to yelizaveta52 for her great beta work

Napoleon moaned as he woke once again. Pain laced every part of his body and he still was unable to move. It took him a few minutes to remember he was tied down in a bunk with tight metal chains.

The memory of what had happened came rushing back to him.

Illya and he had been on assignment in Australia when Waverly had sent him to Fraser Island located along the southern coast of Queensland, Australia. Meantime Illya remained in Sidney to finish the cleanup from their last assignment.

Napoleon was to find out why tourists were disappearing. Having discovered Thrush was taking them prisoner and holding them without any apparent reason, he was captured while reporting his discovery to Waverly. It had been a trap to capture one or both of UNCLE’s top team. After he was captured, the tourists were released and he had been moved to another location.

Never asked a question, he was beaten for days, starved and giving only sips of foul water to drink. After his right leg and a number of other bones were broken, he was chained to the bed. With laughter, the men who had held him left wishing him a long painful death.

Waking up the first time after Thrush had left his body broken and restrained, he was surprised to see a nurse standing above him smiling down at him. Staring at her, his mind tried to decide what wrong. Although dressed as a Navy nurse, her uniform was outdated. More like the pictures that he had seen in his history books.   She looked familiar but he couldn’t possibly know her.

As he tried to ask her where he was, he noticed she was shimmering, not answering any questions he asked, and shaking her head sadly, as she turned away. He glanced around the area to see that he was in an old hospital ship medical section— all of it was shimmering as the nurse had.

“Wait a minute, please don’t go,” he yelled but she seemed to fade away.

“Not going to help old buddy,” another voice came to him. On the edge of his bed sat Danny O’Brian.

“Now is that a way to greet an old friend?” Danny laughed.

“You died in Korea. I held you as you passed.” Napoleon tried sitting up but the chains still held him down. He screamed out in pain with the movement. “Unchain me.”

“Sorry unable to do that, now you lay there old friend. I’m here to make it easier on you after all you did the same for me.” The dead marine placed a reassuring hand on him.

Although he could see the hand on him, he was unable to feel it. “You are not real!” Napoleon spoke slowly enunciating every word.

“Of course I’m not real, I’m dead. But that doesn’t mean I can't keep you company. So what’s with these chains and for that matter the beating you obviously took?”

“Oh don’t be like that Leon. Come on. Tell me what‘s going on Captain. At least you could talk to me. I mean I did interrupt my eternal sleep to come keep you company.”

“Go away and let me die in peace will you?” Napoleon spoke quietly watching the medical unit surrounding him as it faded in and out. He knew that Danny couldn’t possibly be here.

“Now that’s not the captain I remember. Never say die was always your motto. Didn’t you recognize that nurse? Remember Heidi? You wanted to date her in Korea but she kept saying no. However, you found a way to convinced her to go out by crossing the enemy lines to get her and her friends out of danger. Now that’s a guy who doesn’t give up. After you left Korea, she was caught in a bombing raid and was killed” Danny told him.

Napoleon's last interrupted report was to ask Waverly to give him information on over 100 decommissioned war ships but he had never called back to retrieve the information.

It was almost a week before Illya was able to complete his assignment after Napoleon had left to head toward Queensland and the island. Then it was another three days before he came to examine the ship in front of him.

Illya had followed the clues until he arrived at the Maheno. Although not an official Navy ship, it originally was a luxury liner but was used as a hospital ship during the war. She was beached on Fraser Island, where she had been caught in a storm and washed up on the shore as she was being towed to the scrap yard after the war.

Not on the list Napoleon had asked for, the information on this ship came from a tour guide Illya had spoken to. His partner had to be on board. This was the last clue he had to the American’s location.

Looking at the ship in front of him, he shook his head. He knew he was tired but he swore he could see a superimposed battleship on the wreck.

As he looked around unexpectedly as a young woman appeared beside him.    Pulling his gun, he aimed it at her.

“Where did you come from?” He demanded.

“Hurry, he has very little time. He needs help.” She said pointing to the boat ignoring his question.

Before he could ask who she was talking about, she grew fainter before disappearing completely. Had he imagined it? What was going on?

Holding his gun firmer, he entered the ship. As he started down the halls, he watched the corridors fading in and out. Sometimes they looked like a passenger ship while overlapping that image were halls of a naval battleship. Every time he wasn’t sure which way to go, the woman would appear down a hall waving him onward. The word ‘hurry’ echoing in the halls.

“You really need something to eat and sleep as soon as you find Napoleon,” Illya said to himself. It had been three days without sleep and minimum food. It was catching up with him or maybe it’s was a concussion from the piece of the explosion that had hit him as he finished his assignment.

Either Thrush has set a trap from him and he was walking into it, or he was beginning to lose his mind. One way or the other, he would follow her hopefully to his partner.

“Illya?” The small whisper escaped Napoleon’s lips. He looked up to see Danny once more.

“Shh captain. I think your partner’s almost here. Heidi’s bringing him as fast as she can. Hey remember that evening you, Ray and me went into town getting so drunk we wound up in the brig for the night. Oh was the colonel mad. Made us do guard duty for a week. You had to give up seven dates that week.”

“Well I wouldn’t have had to cancel if you hadn’t tried to bed the mayor’s daughter.” Napoleon chuckled a little but it ended in an uncontrolled cough. His eyes began to close as he could felt the fight leaving his body.

“Now none of that. Tell me about the Russian you’re partnered with. He must be quite a guy for you to be willing to work with him. I mean we were fighting them when I died.”

Napoleon knew Danny wasn’t there but just to have someone with him as he died meant he wouldn’t die alone.   In addition, thinking of Illya was comforting.

“Illya is a contradiction of things,” he began softly. “He is stubborn but giving, foolhardy when it comes to other’s safety but careless about his own safety, deathly but innocent in many ways, but mostly he is a loyal friend and partner. He has almost given his life for me many times.”

“Sounds like a nice man to have around. Well captain I hear them coming so I’ll leave you here. Take care.”

Illya turned the last corner just as his partner yelled out. Rushing to the American’s side, he gently touched his face.

“Take it easy, I have you.” Illya said as he used his lock picks to undo the chains binding Napoleon to the bed.

“You’re just another illusion, go away,” the delirious man demanded. He attempted to shove the ‘ghost’ away from him with his freed arm but looked up in surprise as his hand hit something solid.

“I assure you that I am not an illusion. Let me get you free and out of here.” Illya spoke gently to the injured man. “I know you’re in pain and you are only making it worst by fighting me. Let me help you, tovarisch.”

At the word tovarisch, Napoleon stopped struggling and lifted his freed hand to run his hand through Illya’s hair. Illya moved his head closer, allowing the action.

“So soft, I always wanted to do that. You came, but you’re late.”

Illya chuckled and released the other arm. “You didn’t make it easy, my friend.”

Seeing the condition of his partner, Illya knew he would need help removing him from the area. Opening a channel, he asked for assistance and then sat with his partner while waiting.

Finding some bottles of water left by the men who had tortured Napoleon, Illya offered him a drink.

Instead of a sip or two, Napoleon took a large drink causing him to lean over as his stomach seized. Removing the water, Illya sat on the bunk beside him.

“I think we better wait until they can hook up an IV. Your stomach can’t handle anything more.

The American kept touching his partner to assure himself that he was truly there.

When the backup arrived, Illya stood only far enough away to not being in their way but close enough so that his partner could see him. Napoleon kept his eyes on the Russian to ensure he wasn’t dreaming him.

As he was carried out on a stretcher, Napoleon turned back to look Illya’s shoulder as the Russian walked beside him. Heidi was standing beside Danny O’Brian who snapped to attention and gave Napoleon a salute.

“Glad you made it, captain. See you when your time is up, but do me a favor and don’t make it too soon.”

Illya stopped and turned to see where Napoleon was staring. He saw a fading image of a nurse and a man in an American uniform.

As he watched the man disappear, Illya heard a whisper that faded with the man. “Take good care of the captain. He has a lot to accomplish yet.